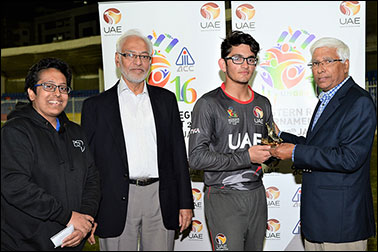 UAE and Kuwait entered the final after posting contrasting victories in the semifinals of the Asian Cricket Council’s Under-16 Western Region tournament being held in the UAE.

While UAE eased past Saudi Arabia by nine wickets in the second semifinal, Kuwait secured a 16-run victory over Oman earlier in the day at the Sharjah Cricket Stadium.

Chasing a modest target, UAE openers were in the comfort zone right from the start with the openers sharing a brilliant century stand as the hosts overhauled the target in just 12.5 overs.

Both the batsmen handled the Saudi Arabia bowlers comfortably to reach 113 in just 12.1 overs.

Ronak Sudesh P showed a lot of aggression as he fired a superb unbeaten 33-ball 66 studded with nine hits to the fence and one over it while Ansh played the perfect second fiddle to score a fine 47 from 40 deliveries. His innings included four boundaries and two sixes.

Earlier winning the toss and electing to bat, Saudi Arabia made a superb start with openers Abdullah and Aamir Hamza Shaikh adding a fine 55 runs for the opening wicket. It was Abdullah who was finding the gaps and those occasional boundaries as he reached 38 from 37 deliveries while Aamir Shaikh could manage only 17 from 47 deliveries.

But once the partnership ended in the 12th over, Saudi Arabia suddenly lost track of the proceedings as they kept losing wicket at regular intervals. Adithya Shetty Anil Kumar and Ronak Sudesh P did most of the damage as Saudi Arabia’s progress completely slowed down before being shot out at 118 in 35 overs.

In the other semifinals, Put in to bat first, Kuwait had a disappointing start with two wickets falling in quick succession before Gokul Sunil Kumar and Abdul Sadiq revived the innings with a 28-run partnership.

The departure of Gokul for 14 from 24 deliveries did not stop the progress as his brother Govind Sunil Kumar joined Sadiq to put on a strong 78-run association for the fourth wicket.

While Govind Sunil Kumar got out after a fine 44 from 59 balls containing three boundaries and two sixes, Abdul Sadiq played 102 deliveries to hit 65 with the help of six fours and a six. Jandu Hamoud Amanullah chipped in with a quick 11-ball 16 as Kuwait posted 168 for eight in 35 overs.

It was not an easy target for Oman given the fact they lost two quick wickets. But despite the pressure, Neev Jayaprakash Poojari and Prathamesh Santosh streamlined the innings to put on a vital 66 runs for the third wicket before the latter perished achieving 34 from 54 balls.

Neev Poojari held the innings firm but wickets kept falling at the other end as Oman steadily lost their grip over the match.

Poojari remained unbeaten on 71 from 99 deliveries with the help of six fours as Oman managed 152 before being all out in 35 overs.

For the winners, Abdul Rehman and Abdul Sadiq bagged two wickets each.