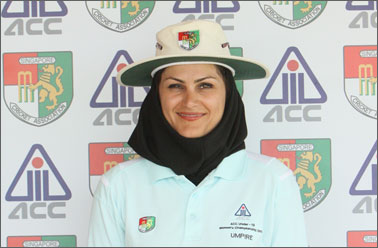 Narges Lafooti, 31, was the first lady to officiate in an ACC Tournament, the U-19 Women’s Championship in October 2010. The event also marked the first time Iran sent a lady official outside the country unaccompanied by any team, for an international tournament. Involved in sport since university either as a player or official, Ms. Lafooti has been a rugby player at university, then a referee and head coach of the national women’s rugby team. She also has lifeguard qualifications and has played varsity baseball. A calm, authoritative presence on the field, off the field she adds to her steeliness with considerable charm and a readiness to laugh.

Ms. Lafooti spoke to us in Singapore, with the assistance of an interpreter.

“I am very glad that Iran’s women players are well thought of.”

I really love batting but I play cricket far less than I’d like to. There are so few umpires in Iran that I have to do that job. I stand at both ends many times, with another umpire always at square leg.

All year I switch between rugby and cricket depending on where the work is. 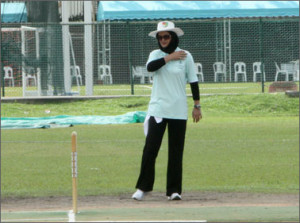 I am travelling quite a lot around Iran for cricket. There are eight provinces with a women’s team.

My interest in cricket started in 2003 when Mr. Hossein Salimian of the Cricket Federation asked me to join an ACC umpiring course run by Mr. Khizar Hayat of Pakistan.

I was one woman among 20 men. There were some people in the class who had been playing cricket for a long time but they scored less marks. I got the highest score in the class, 99 out of 100. The Federation was a little shy to publish my score at first! After that we had a course in Iran for umpires from many countries with Mr. Mahboob Shah of Pakistan and I also did well in that. And it has gone from Level I to Level II in March 2009. I am one of two Level II umpires in Iran and the only lady.

The Iranian men players may not know the customs and rules of cricket very well for which I am sorry but they will learn more as they play more. I do not umpire in men’s matches. 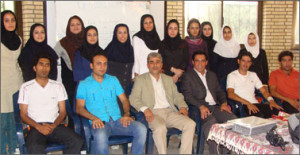 LBWs are hardest to judge. I have noticed in the international tournaments that some bowlers and fielders think that the louder they appeal the more chance they have of getting a wicket but they do not realise that my mind is made up very quickly based on what I have seen and what I have heard and once it is made up it does not change.

I am always learning. I would like to train more lady umpires for Iran. It will definitely help in international matches if I know more English.

When people ask me about why I and Iranian women dress in this way I think it is not an appropriate question and I get tired of answering it. There is no problem with what we wear when we play and I think the question is not polite.

I am very glad that Iran’s women players are well thought of. Shamsa Hashmi gave them great help last year and Hajra Sarwar is doing the same this year. Mohzdeh Bavenpour in Kermanshah is also really helping our women cricketers. I wish I could see cricket on television. I would love to get DVDs of cricket. We have nothing like that in Iran. 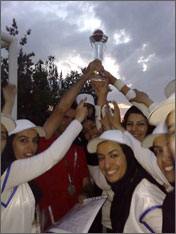